Student Work I: Perception On Drug Use 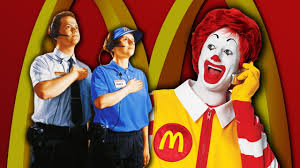 Upon making the decision to acquire a job at McDonald’s in the fall of last year I had no idea of the situation I would be putting myself into. While I have been able to finically support the things that I want, there have been hard-learned lessons that I have been exposed to. Sadly, this job has exposed me to many of the warning signs of drug use and “tweaking” or “gleeking”. Often drug users will come through demonstrating low patience and an inability to focus on the task at hand. One person that sticks out is a Charles Manson look-alike who had a swastika tattoo plastered across his face. During this particular situation, my manager had just gone outside to smoke and I had no idea how to open the register in case this guy was gonna pull a heist on a McDonalds in Rainelle, WV. But this guy with his crazy eyes and swastika tattoo grabbed his Bacon McDoubles and left without making a fuss. Another situation that occurred that really made me aware of some of the signs of rampant drug use was a biker who had a meltdown in our lobby during the “Veterans Day Ride” in Rainelle this year. He had waited a while for his food and continued slamming his fist on the counter and making threats while nobody could hear him. When someone would return to earshot range he would settle down and not say anything (don’t get me wrong I’m not doubting his abilities to jump the counter and start a brawl.) For one last story of a character that I have encountered is a regular customer (a very tattooed lady who sounds and looks like the rapper Young M.A). While I now know how to communicate with this lady, during my first encounter with her I accidentally dropped her change. This was swiftly met with insults, threats, and squealing tires as they skirted out of the parking lot.